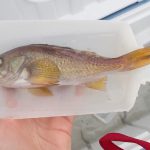 Have you ever wondered what collects, grows and lives in the dry dock each time the caisson is open?

It essentially becomes part of the ocean floor for extended periods of time between dockings and a potential home for numerous life forms.

Prior to docking a Royal Canadian Navy warship or submarine, and in accordance with the DFO Fisheries Act, Fleet Maintenance Facility (FMF) Cape Breton and Formation Safety and Environment (FSE) work together to salvage marine life that has taken up residence in the dry dock, and ensure that any creatures they find are released back into Esquimalt Harbour.

When the dry dock is opened for any period of time it gives aquatic species time to enter, and when it is time to move a warship in for maintenance, the dry dock must close by moving the caisson in, the water drained, and the walls and dock bottom cleaned.

Salvaging the oceanic critters requires many branches and units to work closely over three full days with weeks of advanced planning.

“There are a lot of moving parts to complete a salvage and we’re on a tight timeline to get the species out of the dry dock and back into the ocean as quickly as possible,” said Patricia Swan, an FSE environment officer who often works with FMF to ensure the navy and DND meet all environmental regulations.  “ FMF environment does a great job coordinating all those involved and making it happen behind the scenes.”

Because of the potential for thousands of marine animals to be found, the evolution of the salvage is strategically planned to ensure all life forms are placed in fresh sea water immediately, correctly identified and documented, then brought to various drop points around Esquimalt Harbour.

“It’s challenging yet rewarding work. The diversity and number of species we relocate is pretty amazing,” said Swan. “A marine salvage is a unique thing. Salvages are often conducted in freshwater creeks or streams, but the nature of the ocean makes it difficult to isolate and capture species.”

“The best part of my position is working with the environment team. We each bring different skills and backgrounds, and it is a great feeling to work together to accomplish environmental goals. As well, we are fortunate to have such a diverse and beautiful marine environment in Greater Victoria, so it is important that we do our part to maintain it,” said Noren.

There is quite a diverse range of species that come out of the dry dock salvage and each event can produce different species.

“We had a large school of opalescent squid this round which was pretty cool,” said Swan. “We also caught some bay pipefish, which look like a horizontal, skinny seahorse. Pipefish and seahorse are from the same taxonomic family where the male carries the eggs in a pouch and cares for the young, which is uncommon in the animal world. We also captured multiple species of gunnel fish that look like eels but are taxonomically different.”

Preliminary numbers have shown that over 7,000 organisms were released back into the harbour during this recent marine salvage, with more than 50 different species observed.

Operation DISTINCTION – The 75th Anniversary of ...