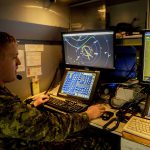 The idea of “airspace” is a complex matter. By its simplest definition, it is the area of atmosphere in which aircraft operate; the realities of airspace are, however, much more involved.

For instance, the aircraft operating in a given airspace must be managed to ensure they can operate safely. This includes controlling military aircraft to conduct their missions; keeping all aircraft at safe distances from each other, from other objects and obstacles; and ensuring they are flying at proper altitudes. The management of airspace in the military world is done by aerospace control officers (AEC) and aerospace control operators (AC Op) in the Royal Canadian Air Force.

But airspace is more than a simple “area of atmosphere.” It can be part of a nation’s sovereign territory and, as such, access can be (and is often required to be) restricted. Such was the case in the airspace around Charlevoix, Québec, during the G7 Summit held June 8 and 9, 2018.

As part of the overall military support to the Royal Canadian Mounted Police for Summit security (called Operation Cadence), the North American Aerospace Defense Command (NORAD)—the bi-national Canadian and American command charged with aerospace defence for North America—was tasked to enforce airspace restrictions that were established for the Summit by the RCMP. While the RCAF had aircraft deployed to handle the enforcement, the overall management of the restricted airspace fell to the RCAF’s AEC and AC Op professionals.

People at all of these locations had important roles supporting airspace security during the Summit, with the bulk of the deployed heavy lifting being provided by 12 Radar Squadron and 8 ACCS. CADS was responsible for the surveillance and identification of all aircraft throughout the operational area. This included continuous real-time coordination between CADS, EADS, NavCan and the Federal Aviation Administration through the use of communication networks and deployed liaison officers. Additionally, CADS assumed tactical command and control of RCAF air assets, standing ready to defend against potential threats within the restricted airspace. Airborne patrols were successfully conducted during the G7 Summit with support from air-to-air refuelling aircraft.

For the deployed forces, 12 Radar Squadron set up their mobile radar system. This, along with the radar of the U.S. Army’s 263rd Army Air and Missile Defence Command (also deployed under NORAD) ensured that NORAD had a detailed radar picture of the local airspace. This, in turn, increased NORAD’s ability to detect potential air-based threats in the region, and to control air assets participating in the G7 by illuminating the airspace and providing deployed communications for CADS in what was a topographically challenging area. This is a role in which 12 Radar Squadron is often employed, having supported similar international events such as the 2016 North American Leaders Summit (Ottawa, Ontario), 2015 PanAm Games (Toronto, Ontario), the 2010 G20 (Toronto) and the 2010 Winter Olympics (Vancouver, British Columbia).

At the same time, 8 ACCS deployed their Expeditionary Aerospace Management Flights to the St Irénée (Québec) Airport. These flights, which included AEC augmentees from other RCAF wings, fulfilled a number of important roles, including providing bilingual ATC services within 30 miles (48 kilometres) of the St Irénée Airport, which is normally uncontrolled. They also provided airspace planning, which assisted Transport Canada, Nav Canada and the RCMP in building effective restrictions to control the airspace around the G7 while accommodating the needs of communities in the area. In addition, 8 ACCS served as an information and communications hub for the deployed Air Task Force, which was critical to maintaining a cohesive effort in a very complex operation.

The success of Operation Cadence was a showcase of the various dynamic effects that the AEC and AC Op occupations bring to both domestic and deployed operations, and demonstrates the high level of training, dedication and expertise that the community brings to air operations.

As an aerospace controller and, more specifically at this point in my career, as an air traffic controller at 15 Wing Moose Jaw, Saskatchewan, I was fortunate to be selected to participate in Operation Cadence, the Canadian Armed Forces’ support to the G7 Summit at Charlevoix Airport in Québec.

Our bilingual Expeditionary Air Traffic Management (EATM) team comprised six officers and six non-commissioned members who specialized in both Instrument Flight Rules (IFR) and Visual Flight Rules operations. We began training in Cornwall, Ontario, at the Canadian Forces School of Aerospace Control Operations (CFSACO), where we were introduced to the Charlevoix airspace as well as to our various roles. Additionally, because several of us had never controlled in a bilingual setting, we received a crash course on French Radio Telephony.

On day one, we began tabletop discussions on how we could best meet our mandate as various scenarios were presented. Our team, as a whole, balanced very well between younger enthusiastic members, and those with more senior experience who instinctively adopted mentoring roles within the team. By the end of our pre-operation training, we had become familiar with the aerodrome/airspace and had a strong understanding of what we had gotten ourselves into.

We left CFSACO and arrived at Charlevoix Airport to a nearly completed military camp, with both our initial control infrastructure and living spaces completed. We were greeted by the permanent 8 Air Communications and Control Squadron (8ACCS) team who wasted no time giving us an airfield familiarization tour. Over the course of the following week, the aerospace telecommunications, and information systems and electrical generating systems technicians worked diligently day and night to provide us with a functional control tower and IFR shelter. Because our first tower was unserviceable on our first operational day, our tower and ground controllers resiliently proved that, at a bare minimum, you can safely manage traffic as long as you have effective radio communications. Our first few days live were filled with gremlin issues and ingenious work-arounds.

Once we began controlling, and all the other players on Operation Cadence became familiar with their various roles and the operational tempo, we fell into a comfortable rhythm. A skill that controllers develop early on in their professional careers is prioritizing information, and completing tasks in a safe, orderly and expeditious manner. Several agencies at Operation Cadence had never worked with an air traffic control unit before, and would frequently ask us questions.

The 8ACCS team is impressive. Despite limited resources, they did what I thought was impossible in such a short period of time. They created a military aerodrome control unit and a military terminal control unit inside an airport that was designed to be uncontrolled. Further to that, they built a precision approach in order to guarantee its usability in bad weather. Moreover, this was done in the middle of one of Canada’s busiest airways over the St. Lawrence River.

The EATM concept proved its worth, domestically, during Operation Cadence, and I look forward to and envy those who can deploy with the 8ACCS team, both domestically and internationally, in the future.