Operation DISTINCTION – The 75th Anniversary of the Italian Campaign commemorates the significant sacrifices and achievements made by those who served. 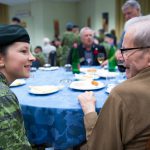 Italy, here we are!

In the past few days, more than 180 Canadian Armed Forces members travelled to Italy to remember the 96,000 Canadians who served in the Italian Campaign of World War II. Part of the Contingent landed early in Sicily to take part in a ceremony held at Agira Canadian War Cemetery on November 28, while the remainder of the contingent arrived in Cassino, Italy after participating at a domestic event in Lansdowne Park, Ottawa.

Contingent members are honoured to have been chosen to represent regiments that fought in the Italian Campaign. This is an opportunity for them to recognize Canadian military members who played a crucial role in World War II, and pay tribute to those members who were injured or died during the Campaign.

Contingent members are experiencing strong feelings of pride and respect for those who have gone before them, and are continually performing with a strong sense of professionalism and excellence. These members remind us of the significant sacrifices and achievements made by those who currently serve, preserving this legacy for future generations.

Events and ceremonies have just begun, however, the camaraderie and morale within the contingent, and the cooperation between organizations is already strong. The next few days are promising to be very meaningful to all involved.

It’s also a time for storytelling!

On November 29, 2019 a meet and greet including members and veterans was held in Cassino, Italy. Selected members of the Canadian Armed Forces (CAF) contingent had the honour to speak with veterans who shared memories and remembered the past through storytelling.

The night was very moving for both the contingent members of Operation Distinction and the veterans participating in the Government of Canada’s Military History Commemoration Program for the 75th Anniversary of the Italian Campaign. The room was vibrant with emotion as members and veterans shared war stories. Many of the attendees had never met before, but as they all served or were currently serving, a clear and unquestionable bond connected everyone in the room. Wonderful memories were created that will forever have a special place in the hearts and minds of all who took part in this amazing experience.

Contingent CAF members were grateful for the meaningful opportunity, and appreciated every minute spent in the presence of the veterans. The meet and greet was so successful that other occasions have been planned over the coming days for contingency members and veterans to reunite for conversation.