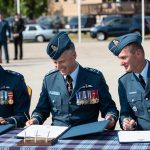 Personnel from 2 Canadian Air Division (2 CAD) gathered on the parade square at 17 Winnipeg, Manitoba, on August 9, 2018, to say farewell to their outgoing commander and welcome their incoming commander.

Brigadier-General Dave Cochrane, who has commanded 2 CAD for the past three years, has transferred to National Defence Headquarters in Ottawa, where he is taking up the reins as commander of Cadets and Junior Canadian Rangers.

Lieutenant-General Al Meinzinger, commander of the Royal Canadian Air Force, presided over the change of command ceremony, praising the men and women of 2 CAD as well as their outgoing and incoming commanders.

“You are a fundamental enabler for delivering air and space power and I am proud of the work you do,” he told the personnel on parade. “I am extremely impressed with what you have accomplished over the last three years. [But your achievements] would not have been possible without the brilliant and committed leadership of Brigadier-General Cochrane.

“Dave, you brought a wealth of experience to your three-year command of 2 Canadian Air Division—ranging from your challenging operational deployments within the air mobility community to your compassionate leadership at 8 Wing Trenton during an extremely challenging time.

“Your career has been one of impact and success. At 2 CAD you’ve served the entire Air Force with distinction and delivered on key institutional initiatives,” he continued.

Brigadier-General Cochrane also praised the 2 CAD staff and students in his remarks. “With our critical RCAF training and education mandate and the great team of 2 CAD, which encompasses over 2,000 staff, I truly believe we have moved the yardsticks significantly.”

Lieutenant-General Meinzinger welcomed incoming commander Brigadier-General Mario Leblanc, noting that Brigadier-General Leblanc came to Winnipeg from the post of Deputy J3 U.S Pacific Command, in Pearl Harbor, Hawaii. “Brigadier-General Leblanc worked for me in Colorado Springs when we were together in NORAD / USNORTHCOM headquarters,” he told the audience. “So I know first-hand the capabilities and the outstanding qualities you bring to this post—tremendous skill, professionalism and class.

“I look forward to seeing how you move the command forward in the coming years,” Lieutenant-General Meinzinger continued. “You are the right leader to tackle the challenges ahead.”

Upon accepting command, Brigadier-General Leblanc addressed those gathered. “We will maintain our strong ability to support training and professional development, which fuels RCAF operations.  We will keep focusing on our “amazing people, our new defence policy, our program and our posture.”

Following the usual ceremonial aspects of the parade—the inspection of the Guard of Honour, the signing of the change of command documents, the salutes and the passing of the 2 CAD Colour from the outgoing commander to the new—Brigadier-General Cochrane took his departure from the parade square and 2 CAD in a golf cart that was festooned with decorations that clearly displayed his loyalty to the Toronto Maple Leafs hockey team.

Military steps up with wildfire response