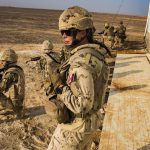 The Canadian Training and Assistance Teams (CTAT) on Operation IMPACT, Canada’s training mission in the Middle East, are helping Jordan and Lebanon build military capacity through projects and training that contribute to long-term security and stability.

One of those projects is the CTAT-Jordan’s Mentoring Training Team (MTT) is an all-female team of Canadian Armed Forces (CAF) Regular and Reserve Force members who have been working closely with an all-female infantry platoon of the Jordanian Armed Forces (JAF) Quick Reaction Force (QRF) since September 2018.

The platoon, created two years ago, is the first of its kind in Jordan. It was designed to carry out humanitarian missions and respond to domestic emergencies, with a focus on assistance to women and children.

The Canadian MTT provides specialized training to the platoon, which includes combat first aid, personnel and vehicle searches, and interactions with civilian and displaced persons. All are essential skills for an effective humanitarian force.

Exercise EAGER LION 19, was held in Jordan from August 25 to September 5, 2019, and is the largest military exercise in the Middle East. It was the first opportunity for the platoon to apply their new skills and demonstrate their capabilities.

During a simulated air assault operation, the first wave of soldiers to disembark from the H215 Super Puma helicopter included six members of the female platoon. Alongside other Jordanian QRF members and soldiers from 3rd Battalion, Parachute Regiment, an airborne light infantry unit from the British Army, they successfully carried out battlefield manoeuvers.

Throughout the exercise, they also demonstrated their skills in detaining enemy combatants, conducting personnel searches, and providing first aid to injured locals. They were undeniably an integral asset within the QRF Brigade, enhancing its operational abilities.

The Canadian MTT continues to assist the training and development of the platoon. From physical fitness and basic soldiering skills to specialized humanitarian aid, this team of exceptional JAF female soldiers are quickly becoming experts in their field who will soon be ready for any mission.