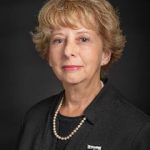 The Memorial Cross (more often referred to as the Silver Cross) was first authorized on December 1, 1919 as a memento of personal loss and sacrifice on the part of widows and mothers of Canadian sailors, aviators and soldiers who died for their country during the war.

As the National Silver Cross Mother, Mrs. Dawe will place a wreath at the National War Memorial on 11 November 2019 on behalf of all Canadian mothers who have lost a son or a daughter in the military service of Canada. Throughout the year, she will also be called upon to perform other duties honouring the Fallen from all conflicts.

Reine Dawe’s early life began in the small town of St-Prosper, just south of Quebec City. Later graduating from Laval University’s physiotherapy program, she entered a profession she enjoyed immensely until her retirement in 2013.

It was during her physiotherapy studies that she first met her future husband Peter Dawe, now a retired Lieutenant-Colonel who served close to 35 years in the Army. Reine’s physiotherapy internship had first taken her to Halifax, Nova Scotia to the military hospital at HMCS Stadacona. She and Peter were married two years later.

Reine naturally became part of her husband’s wider military family. She recalls the challenging and exciting times as a military spouse; being introduced to new places and new friends during regular moves within Canada and the United States. During this busy time, she and her husband also raised four active boys.

Peter, Philip, James and Matthew occupied much of Reine’s time. She occasionally joined parent-teacher associations and spent many hours cheering her sons in hockey rinks and various other sports facilities. She also pursued professional continuing education and worked in a series of medical facilities often in military hospitals and clinics. She always focused on keeping a good balance between work and family demands.

The Dawe boys were involved in everything from sports to music, and all four went on to follow their father’s example by joining the military. Philip, James and Matthew graduated from The Royal Military College. The eldest, Peter, did not attend the College but later obtained two Master’s degrees from the same institution. Peter is now a Major-General and Commander of the Canadian Special Operations Forces. Philip is a trauma surgeon at the Vancouver General Hospital and a Major in charge of the Canadian Forces Trauma Centre in that city. James retired as a Captain in the 3 PPCLI after serving five years, including a tour in Bosnia. He now lives in Kingston, Ontario, and is Vice President North Atlantic of an American workplace supply company. Matthew, the youngest, was posted to 3 PPCLI and served in Afghanistan where he died performing his duties as a platoon Commander.

Reine remains an avid reader and stays up to date on social and political matters. As a volunteer with organizations such as Canadians for Women in Afghanistan and The Kingston Symphony Association, she focuses her time on issues that personally resonate with her.

Besides travelling and golfing, she and her husband very much enjoy the local art scene, concerts, theatre and the cinema. They also delight in the time spent with their eight grandchildren. Notably, 2019 marks Reine and Peter’s 50th wedding anniversary; and while they look back and feel very fortunate, she says there will always be deep sorrow for the loss of their son Matthew, an enthusiastic man with a distinguished past and bright future.

Matthew was the youngest of four boys. He grew up with severe asthma but coped well. Early on, he memorized the names and dosages of his medications, a sign that he could adapt to life’s challenges. Quick to recover after serious medical episodes, he maintained an outgoing friendly spirit and enjoyed a full range of activities from sports to a love of music and drama; he was especially good at impersonating family and friends.

His positive attitude followed him everywhere, including to the Royal Military College in Kingston, Ontario. There, he received his Civil Engineering degree with first class honours and was described by one professor as “a student everyone would love to have.” He was appointed Cadet Wing Commander – the highest cadet rank – in his final year. Cadets junior to him knew him as a compassionate leader who cared.

Posted to 3 PPCLI after graduating in 2004, Matthew was given command of 8 Platoon, which led to interesting and challenging experiences with US Army counterparts. He successfully argued that his role in preparing his team for deployment to Afghanistan should continue past the customary two-year appointment as platoon commander. He then made a rapid recovery from a ruptured Achilles tendon and was ready for deployment in four months instead of the doctor’s prediction of a year, something that would have prevented his deployment. He was determined to be with his “boys” and share the danger.

Matthew was always a positive example to his platoon – known as “1-2 can do” – due to a willingness to volunteer for the toughest of assignments. He was deeply affected when he had to identify and recover three platoon members killed by an Improvised Explosive Device (IED). Two weeks later, he was engaged in an operation to neutralize the local bomb maker believed to be behind that deadly IED. Returning from that mission, his vehicle was targeted by a 500-pound bomb buried in the road. He died instantly, along with five Canadian soldiers and an Afghan interpreter. After his repatriation ceremony, Matthew’s platoon members openly shared personal stories of their commander’s positive leadership.

Matthew Dawe’s persona transcended his passing, and he remains larger than life to this day. At the Royal Military College, the study room in the Civil Engineering department bears his name, as does a varsity athletic award and a sword presented annually to the top combat arms cadet. A building at Base Kingston and the #631 Collins Bay Legion Branch in that city also bear his name. Finally, he is remembered by his alma mater, La Salle Secondary, with an annual award for outstanding leadership and school spirit.

Beyond these special honours, Matthew’s everlasting legacy is his son Lucas, whose second birthday also marked the day his father was killed. Lucas is described as a “chip off the old block,” filled with good humour, determination and athleticism: a reflection of his Dad’s accomplishments and potential.