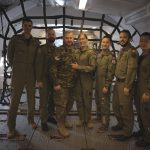 A couple in the Canadian Armed Forces (CAF) took marriage to new heights – literally. On July 29, at more than 23,000 feet and a speed of 320 knots, Corporal (Cpl) Rachelle MacDonald and Warrant Officer (WO) Adrian MacKinnon said “I do” aboard the CC-150 Polaris aircraft. As a flight attendant at 8 Wing Trenton’s 437 Transport Squadron, the Polaris is like a second home for Cpl MacDonald. WO MacKinnon, who is currently posted at Joint Base Elmendorf-Richardson in Anchorage, Alaska, is the detachment commander for the communications research team working with the United States Air Force.

While most nuptials are all about the pomp and circumstance, the newlyweds opted for something with a little less frill and a whole lot more thrill. In a more traditional setting one’s special day may call for a dress and a suit, but, this wedding was anything but ordinary. Instead, the bride and groom tied the knot above the city of Fairbanks, Alaska, donning their issued flight suit and Canadian Disruptive Pattern (CADPAT) – as protocol aboard a military aircraft requires. “We knew we wanted to elope,” explained Cpl MacDonald. “It was just a question of how and when. Then someone in my squadron brought up the idea of whether or not an aircraft commander is able to marry people in the same sense that a commander of a ship is able to.” Turns out that was not the case. However, knowing that the Polaris was set to head to Alaska for a refueling mission, as they are often used for, Cpl MacDonald saw this as unique opportunity to see what could be done. Looking into the laws governing marriage in Alaska, the couple found out that an appointed marriage commissioner could in fact conduct a ceremony. It was then she found out that the loadmaster of the flight going to Alaska was a colleague she trusted and asked if he would take the role as marriage commissioner. Upon his acceptance of the position, the couple applied for a marriage license in Alaska and began preparations for the big day. While grateful for the experience, Cpl MacDonald was quick to reiterate that the flight wasn’t just for the wedding. It was made possible due to the fact that the aircraft was already going to be conducting a refueling mission. “In a little five-minute window before we went back to the Base, that’s when we got married,” said Cpl MacDonald. “It was a real team effort and the whole crew was amazing.” Everyone aboard the aircraft played a unique role from one of the pilots who took wedding portraits to the air combat system officer who signed as a witness to the marriage.

While there was no fancy reception to be had, there was in fact a wedding cake, which the crew had surprised the couple with. “I think they were just as excited as we were, which was very sweet,” she said. “It was also pretty special since the air force means so much to us. I’m army but I work in an air force job and he recently switched to air force from the navy. It was just so amazing for us to come together this way.” As for WO MacKinnon’s favourite part of the whole experience, apart from marrying his wife, he said it was getting to be part of such a unique opportunity. “It’s something that neither Rachelle nor I had heard of happening before, and the same with the rest of the crew,” he said. “The way 437 Transport Squadron, and the Polaris crew in particular, treated Rachelle and I was heartwarming. I felt like not only were Rachelle and I joining to make our own family, but I was being welcomed into her Squadron family as well.” In addition, he noted it was great getting a little more perspective on the job his wife does on the daily. “I brag about Rachelle and her awesome job all the time. Now I’ve had the chance to witness her professionalism and work ethic in person,” he said.

As for the honeymoon, that will have to wait, since the couple is posted in different countries. But, while the long distance can be hard, Cpl MacDonald and WO MacKinnon noted the key to success for any relationship is good communication. “We’ve been in a long-distance relationship since the beginning,” she said. “We just make sure to use modern technology to our advantage and take the time to say good morning every day.” WO MacKinnon added that trust was also a crucial component.  “Not simply trust in each other to remain faithful – that’s obvious, but trust in your partner to communicate openly,” he explained. “Don’t dwell on the difficulties, focus on being each other’s biggest supporters. Also, open a dialogue with your Chain of Command and you may be surprised how much support is available.” Lastly, what has also helped make the long distance is a little easier to handle is the fact that both are living out their dreams and desire to serve their country. “I wanted to be a flight attendant for many years and when Adrian found out he got the job of his dreams too, the answer was simple,” said Cpl MacDonald. “We love each other too much to allow the other one to give up on that dream. Distance is just a little blip before we’re back together again.”