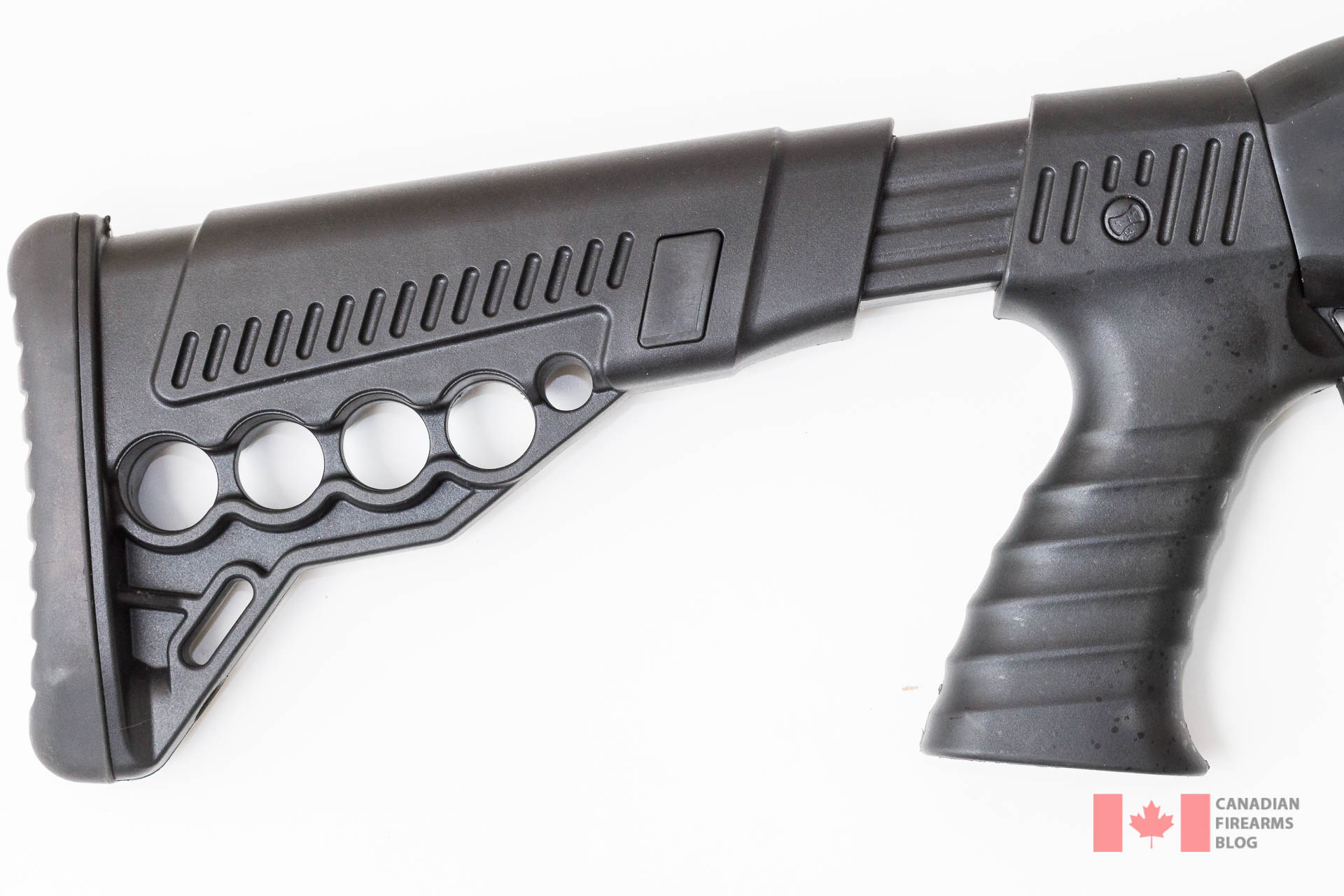 We review the stout, fun-sized shotgun: the Dagger SAP6 Tactical.

Tactical Imports kindly provided this SAP6 Tactical for review.
It can be purchased directly from their website here.

Weighing in at 7.5 pound, just under 32 inches, and chambered for 3″ 12 gauge shells, the SAP6 Tactical is a Turkish-made, non-restricted, short-barrelled, box magazine-fed pump action shotgun. It sports 4-position collapsible stock with built-in shell holder, pistol grip, and plenty of space for Picatinny attachments including a full-length rail along the top, three additional positions at the end of the barrel (left, right, and bottom), as well as along the bottom of the forend. It also accepts 2 3/4″ shells, and comes with either 6 or 11-round magazines and a full set of chokes ranging from cylinder to full.

The build quality is, unsurprisingly, quite similar to the other SAP6 models but with a few very noticeable differences. First, the spring: instead of the large external spring, Dagger elected to move it inside of the forend. While this does make things a little more convenient for cleaning, it does leave the shotgun looking barren and incomplete.

Second is the large rail. While the SAP6 does, indeed, have a full-length rail that screws in to the barrel’s ribbing, the Tactical version utilises a rail that is almost like a barrel shroud in appearance. The rail is also affixed to the firearm by two arms that extend down to the bottom of the receiver and are held in place by a takedown pin.

This is a very poor design decision as these arms scratch and damage the finish of the receiver every time the rail is removed – which must be done in order to even field strip the gun for cleaning or maintenance. It would have been a much better idea to keep the same rail used on the previous models. Third, the forend. Instead of a traditional forend, the Tactical’s pump action is intended to be manipulated exclusively by use of a vertical foregrip (which does come with the shotgun).

Also different is the safety. While it uses the same design, I found the safety on the Tactical to be much stiffer and harder to manipulate than the original SAP6. So much so that I ended up not using the safety at all, only engaging it when putting the shotgun away in the safe.

As for the similarities, the Tactical uses the same collapsible stock, pistol grip, receiver, and internals. It also uses the same polymer lower receiver that, disappointingly, still hasn’t had the issue of the injection moulding artifacts addressed – namely the large nib just forward of the trigger guard. For me, that’s a lack of attention to detail. The shell holder in the stock is a neat idea, but the fit is far too tight for it to be practical.

The trigger is less than desirable with a very tight, gritty take-up and at least 7 pounds of pressure before it breaks. Not very noticeable if you aren’t looking for it, but it could be much better. I also found that the screw holding the stock in place would loosen up and back out, although this should be easily resolved by using threadlocker. The magazines were also tough to insert and fully seat, often needing a good whack for the mag to click into place.

I had an issue with reliability. It could have been the magazines, or maybe a worn extractor, but I had a number of failures to feed and failures to eject even with different ammo. in many cases, no matter the amount of force used to rack the slide back, I could not get a new shell to engage and feed into the chamber. On a few others, the shell would engage and begin to move up the feed ramp only to get jammed up against the top of the chamber. It also felt like at least once every 20 shots I’d have a shell partially eject when racking the slide back and proceed to stovepipe, making any followup shots impossible – not good if you’re using the shotgun for defence.

While there certainly a few things I think were not all that great about the SAP6 Tactical , I still found it to be a very fun shotgun and an overall pleasant experience to take to the range. It being mag-fed and as compact as it is makes it ideal for wildlife defence or for use as a “truck gun”. At $700 it is, perhaps, more expensive than other similar short barrelled shotguns à la the Dominion Arms Grizzly. (My experience with the SAP6 Tactical, however, is a bit more favourable than the Grizzly). I’ll tell ya what, though, it sure is fun watching the old guys turn their heads and make faces while shooting clays- and it performed surprisingly well!

Firearms marking regulations to be delayed until ...