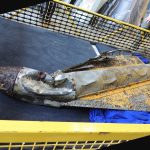 The first artifact recovered by the “Raise the Arrow” team broke the surface of Lake Ontario on August 12, 2018—seeing the light of day for the first time in more than 60 years.

The artifact was discovered during the search for the 1/8th-scale free flight models (FFM) of the famed CF-105 Avro Arrow that were launched over Lake Ontario during testing of the supersonic aircraft’s design in the 1950s. “This is an unexpected success,” said John Burzynski, leader of the “Raise the Arrow” project. “It’s something we didn’t really know existed.”

“This is an exciting day for the ‘Raise the Arrow’ team and for the Royal Canadian Air Force’s history,” said Dr. Richard Mayne, the Royal Canadian Air Force’s chief historian the day after the artifact was raised from Lake Ontario. “This is just the beginning of the road to discovery and for me—as a historian—the really exciting part is now determining exactly what this is.”

The primary goal of the “Raise the Arrow” project is to find one of the Arrrow FFMs that were of differing and progressive designs, launched into Lake Ontario from a military range at Point Petre, Prince Edward County, Ontario.

“This is a Delta Test Vehicle (DTV),” said Dr. Mayne on August 24, after several days of further research. “Contemporary documentation suggests that the DTVs were somehow linked to the Avro Arrow’s FFM program.

“Documentation has been found in historical report from the FFM tests that include data from the DTV launches. Research will continue into the history of the DTVs that will, hopefully, further clarify their role and relationship to the FFM program.” Three DTVs were launched: two in April 1954 and one in October 1954. They may have been launched using rocket boosters left over from the “Velvet Glove” missile testing that also took place at Point Petre, according to Jim Johnson, who worked as a technician at CARDE—the Canadian Armament Research and Development Establishment—at Point Petre in the 1950s.

After being raised from the waters off Point Petre, the artifact was transported by water to 8 Wing Trenton on August 13. The commander of the RCAF, Lieutenant-General Al Meinzinger, was onboard the workboat Wilson T. Cooper for the artifact’s brief journey to the wing and for its “reveal” on the shore.

“It’s a remarkable day,” he said, “being here and seeing this first piece from the project unveiled here. It speaks to our RCAF history and I am so pleased that the Royal Canadian Air Force is supporting this recovery effort.”

“The object we’re about to look at went into the water just over 60 years ago,” he said before the tarpaulin covering the object was pulled back for spectators to see. “We hope to bring up more in the near future, but this was a strong success for the team. It was a beautiful moment yesterday when it broke the surface and yes, there was cheering!

Raising the DTV was a “great trial of our capabilities and went really well,” he added.

The search began last summer and resumed in the late spring of this year. He’s determined to keep up this year’s work as long as the weather permits and to return again next summer.

“The sonar crew is out there today,” said Mr. Burzynski after the artifact was unveiled, “and we are going to continue to develop targets.” He explained that the search area is littered with hundreds, if not thousands, of potential targets. Beginning in 1938, Point Petre was used as an artillery range and sections of the site were used for test firing the “Velvet Glove” and “Sparrow” air-to-air missiles in the 1950s as well as the launching of the Avro Arrow free flight models. Even the mussel-covered limestone rock formations can look like man-made objects.

The team has identified at least 200 potential targets “but the only way we can tell [for certain what they are] is to get divers on them,” continued Mr. Burzynski. The Royal Canadian Navy’s Fleet Diving Unit (Atlantic) came out to the search site earlier in August to assist in target verification, looking closely at potential targets, and helping to prepare for lifting the artifact raised on August 12, which was carried out by commercial divers. The Navy divers “gave us some really great help for three days,” he said. “It was like watching a symphony orchestra, the way they worked.”

Following reconnaissance diving by the Navy divers, the task of preloading the artifact and recovering it fell to project archaeologist Scarlett Janusas. The artifact was prepared underwater by sliding plastic tubing under the main body and then layering it with coroplast sheets (which are similar to corrugated cardboard, but made of plastic). The artifact was literally moved inch by inch under Ms. Janusas’ watchful eyes, periodically being checked for stability and continued integrity, until it was fully and carefully loaded into a special crib. The crib itself had been prepared with protective covers to ensure no damage would occur to the artifact. After the loading of the artifact came the work of covering it with protective foam for both stability and security, as shifting of the artifact in transit could prove disastrous.

The next day, staff of the Canadian Conservation Institute (CCI) came aboard and, in consultation with Ms. Janusas, approved the packing of the artifact for lift. The entire team gathered around the live feed from the commercial divers, and the lift proceeded successfully to the surface. “The preloading of the artifact and the lift to the surface could not have been more textbook” said Ms. Janusas.

The artifact is now in the hands of the CCI team, which is a special operating agency within the Department of Canadian Heritage located in Ottawa

“We need to keep the artifact wet until we can do a controlled ‘dry’ and have a full condition assessment,” explained Nancy Binnie, a senior conservation scientist with the CCI. Among the many tests being carried out, water samples taken from the vicinity of the artifact are being tested for salinity. If there is salt present in the lake water—which is possible even in a fresh water lake—the artifact will have to be desalinated before it is allowed to dry. As Canadians who drive cars in the winter know, water + salt + oxygen = rust. Mussels and sediment from the lake bottom were also collected and are being tested to help determine the most suitable conservation processes.

As the first step, explained Ms. Binnie, “we’ll get rid of the things that stink and rot fast” by carefully cutting off the mussel shells one-by-one with scalpels. That was accomplished by the end of August 14. However, the mussels attach themselves to surfaces with long sticky filaments that have suction disks at their ends. Those are more difficult to remove, so the conservation team will “sand-blast” the surfaces with finely shaved dry ice. Dry ice leaves no grit or residue since it evaporates as soon as it hits the surface. The technique was tested on non-Arrow objects to determine the exact pressure to use to gently clean the surface without stripping it.

“Removing the mussels revealed a surprising amount of paint that is loosely adhering to the metal,” explained Elisabeth Joy of the CCI. “The conservators’ skills and knowledge comes into play here to clean the surface while preserving as much of the paint as possible. This is also why you can’t just dry the object; the paint could just pop off without treatment.”

On Monday, August 20, the artifact travelled by road to the Canadian Aviation and Space Museum (part of Ingenium Canada) in Ottawa where CCI conservators are continuing to treati it. Two CCI conservators remained in Trenton until the road move to oversee the packing and loading for the road move and to ensure that the item remained wet.

Meanwhile, as conservation and research continue, so will the search for the “Holy Grail”: the Avro Arrow FFMs that were launched at Point Petre.

“We will aim to complete our search and recovery next summer,” said Mr. Burzynski.

“Raise the Arrow” (In English)