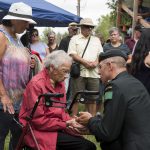 Seven members of the Jocko family of Madawaska were honoured for their service and sacrifice during the national war effort from 1939 to 1945, at the 31st annual Algonquins of Pikwakanagan First Nation Pow Wow in August.

“I am honoured that I can be here to participate in this ceremony and recognize the contributions of the members of the Jocko family who proudly served our country through time of war,” said Col Lapointe. “I am sure those who will receive the medals in their place today will feel the importance and honour of this incredible recognition.”

Indigenous peoples in Canada have fought on the front line of every major battle Canada has been involved in, said Councillor Wendy Jocko of the Algonquins of Pikwakanagan First Nation, Leo’s daughter and a veteran of the Canadian Armed Forces. More than 500 died, and many more were wounded or captured.

“Their notable contributions to the war effort became a source of inspiration and self-confidence to themselves, to their communities and to Canadians in general,” she said.

All but three eligible men from the Algonquins of Pikwakanagan First Nation enlisted in the war effort, and in other Indigenous communities, the enlistment record was equally impressive.

“The Jocko brothers fought as equals with their comrades-in-arms from all segments of Canadian society,” Wendy Jocko noted. “They returned home with a self-awareness that they were not ‘second-class’ persons, and they sought the same principles of democracy, freedom, and equality for which all Canadians had fought and died. My uncles, aunt and father sought one thing above all else: acknowledgement for their contributions.”

Jocko explained that Jane Anne Chartrand had made a personal request through the Aboriginal Veterans Association that her uncles and aunt be formally acknowledged for their service by the presentation of the AVVM.

The AVVM was created in 2000 to commemorate Indigenous persons who risked their lives and sacrificed so much in the fight for freedom and democracy.

Farewell to the King!