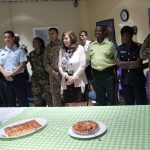 On September 13, teachers and students from the two campuses of the Canadian Forces Language School at Asticou (Gatineau), and the Detachment Saint-Jean organized various activities to highlight Linguistic Duality Day. In the spirit of coexistence and use of both official languages of Canada, workshops were offered at each campus.

Students at Asticou were able to participate in several activities, including reading a message out loud and focusing on the four pronunciation problems that are identified as challenges and identifying the sounds that he or she knew how to pronounce. This was followed by a group discussion about the specific details of the message.

One group of students watched a video discussing the French origins of some words in the English language was shared to pique the curiosity of the students by demonstrates how English and French are not so different.

Finally, passages from the book “Champions” were shared with students, followed by a discussion relating its text to language rights, training, second language, bilingual backgrounds, and service in the official language of choice.

At Detachment Saint-Jean, the two classes of the Military Training and Cooperation Programme (MTCP-short course) were invited to join their teachers to relax and socialize in their respective languages while enjoying a snack of fruits from the Niagara Valley.

RCMP Will Publish 2017 Commissioner of Firearms ...