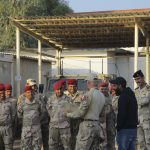 “We’re here to develop Iraqi solutions suitable to their needs and sustainable after we leave.”

Deploying north of Baghdad to instruct Iraqi Security Forces (ISF) on the use of specialized counter-improvised explosive device (IED) equipment, 20 soldiers from 4 Engineer Support Regiment (4 ESR) in Gagetown, N.B. have been supporting Coalition efforts in building partner capacity since August 2018.

Now part of Joint Task Force – Iraq’s Explosive Threat Training Team, known as ET3, they are providing advanced training to experienced ISF members who must deal with the explosive remnants of war. This fits well with the Operation IMPACT mission, which is to build ISF capacity to defeat the remnants of Daesh and bring stability to the region.

As counter-IED specialists who operate a suite of mine and IED detection vehicles, known as EROC or expedient route clearing capability, these 20 combat engineers and support personnel from 4 ESR aren’t here looking for roadside bombs – they’re here to teach Iraqi army engineers how to do it themselves.

“We’re not here to apply Canadian solutions to Iraqi problems,” said Maj Josh Kilburn, officer commanding the ET3. “We’re here to develop Iraqi solutions suitable to their needs and sustainable after we leave. Working ourselves out of a job is the ultimate goal.”

ET3 has been training ISF members since 2017 through a program known as train-the-trainer, which encompasses a concerted effort on behalf of the Coalition to give the Iraqi army the skills and tools it needs to build capacity to protect and maintain safe communities across Iraq.

Assigned to ET3’s Route Clearance Package Training Team (RCPTT) – the first of its kind in Iraq – these 20 members of 4 ESR have developed and implemented a training plan for teaching Iraqi army engineers at their school north of Baghdad. Although the equipment used by both partner countries is similar, Canadian instructors must adjust to working through interpreters, different sociocultural norms, and most importantly, the needs of the Iraqi Army. Nonetheless, for members of the RCPTT, the experience of working with these Iraqi engineers has been overwhelmingly positive.

“These soldiers are eager to learn, very much like us – and the honour and respect returned by the Iraqis has been outstanding,” said Sgt Don Read, the RCPTT’s chief instructor.

The RCPTT splits its time between mentoring Iraqi instructors and teaching new students. Not limited to mines and IEDs, the team has ensured that its 8-week program is comprehensive – covering vehicle maintenance, medical response and instructional technique training to ensure that when Iraqi soldiers go back to their units, they can continue what the Canadian Armed Forces began.

“This has been an outstanding experience. We have built relationships with our ISF partners, while taking a field they already have experience in and making them more effective,” said Cpl Kevin Sagaria, a RCPTT signaller.

Set to return to Canada in early 2019, these 20 members of 4 ESR are making a difference – preparing ISF members to be self-sustaining, while returning stability to the region for their families and fellow Iraqis.