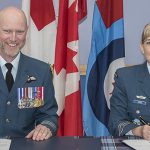 She formally accepted the honorary appointment during a ceremony presided over by 4 Wing commander Colonel Paul Doyle and attended by her family, military personnel and Defence employees.

“In high school, I intended to follow in the footsteps of my Dad by joining the Royal Canadian Air Force,” said Honorary Colonel Gates, who was born in Alberta. “I dreamed of being a fighter pilot. Although my life’s path ultimately took a different route, my recent leadership role in the Cold Lake community allowed me to reconnect to my passion for the Air Force.

“Participating in the 4 Wing Logistics and Engineering Mess Dinner was a highlight I will never forget, and made me feel welcomed into the RCAF family. It is sincerely an honour to have this opportunity to serve the great men and women of the Royal Canadian Air Force.

“I am proud to accept, with utmost humility, the role of honorary colonel for 4 Wing.”

Honorary Colonel Gates was appointed president for ExxonMobil Alaska Production in March 2018. She holds a mechanical engineering degree from the University of Victoria and began her career with Imperial Oil in 1995 as the Leduc area reservoir engineer. She was the first female operations superintendent in Imperial Oil’s history.

The honorary colonel title carries many responsibilities such as developing, promoting and sustaining strong community ties for the wing, establishing and maintaining a liaison with the commander as well as with other honorary colonels, assisting in hosting parades and other official wing functions, and fostering esprit de corps and establishing and maintaining liaison with the wing’s charities and associations.

Ask the Expert: Exercise pills, are they ...