A licence plate for veterans: honouring the duty to remember 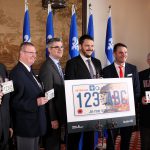 On 12 April, the new veterans’ licence plate was unveiled by Quebec Transport Minister François Bonnardel at the Quebec Garrison Club. The announcement is the culmination of a process that was started more than 15 years ago by a committee of Quebec veterans to improve the visual appearance of the plate.

“It’s a great day––it’s memorable! We’re happy for all the people who will be entitled to receive the new plate, and for those who served and who are no longer here today,” Pierre Dugal said with emotion after the long-awaited unveiling of the plate. Mr Dugal is a veteran and one of the determined committee members who made the new plates possible.
“We’re proud to announce that we’re fulfilling this commitment that has been close to our hearts. This plate is a way to uphold the duty to remember all those who have fallen, who have recovered, who have returned wounded or otherwise […]. I think that this is the most beautiful plate in North America,” said Minister Bonnardel.

The first version of the plate that many have hung on the backs of their cars is rather inconspicuous: a small poppy is the only indication that a veteran is driving. The graphics of the new plate are much sharper and more evocative. The word “veterans” has been added, which was one of the requests made by the veterans’ committee several years ago. The poppy, a symbol of remembrance, still has its place and is featured alongside the prominent profiles of two CAF members, one male and one female.

The commemorative plate is available exclusively to veterans who request it from the Royal Canadian Legion. The only cost is a small $15 fee for the Legion to review each request. If the application is accepted by the Legion, the Société de l’assurance automobile du Québec (SAAQ) will mail the plate and the new registration certificate to the veteran.

Veterans who already have a commemorative plate will receive a letter with a form on the back during the week of 29 April 2019. All they have to do is complete the form and send it back to the SAAQ in the envelope provided. The requested plates will be sent by mail within three to six weeks of the application being evaluated. Veterans who have not received a letter by 3 May will be able to call 1-800-361-7620 for assistance. Those who do not already have a vehicle registered with a veterans’ plate and who make their first application to the Royal Canadian Legion will automatically receive the new plate model.