This Could Be You! 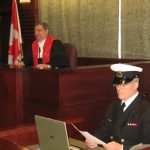 The Office of the Chief Military Judge (CMJ) is looking for CAF members at the rank of PO1/WO or PO2/Sgt to become military court reporters, with training to begin as soon as possible.

What is a court martial?

Court martials are formal military courts presided over by independent military judges. These tribunals are similar in nature to civilian criminal courts, with the exception that it is the court that travels wherever the CAF is deployed.

What is a court reporter?

What is the court reporter’s job?

What are the court reporter’s skills and who can apply?

Court reporters must be skilled at transcribing speech from recording. Becoming a court reporter requires a commitment of time and effort. The formal on-the-job training is delivered in Gatineau (Québec) at the Office of the CMJ. The training takes approximately 6 months to achieve certification.

Court reporter positions are filled through a continuous voluntary occupation transfer (OT) process that is open to all occupations and members can apply any time during the year. The entry standards include a valid bilingual language profile of “CCC” or higher; however, as the occupation is currently below the Preferred Manning Level (PML), potential candidates who do not meet the language profile are eligible for consideration.

PO1/WO or PO2/Sgt with at least 3 years seniority in rank (PO2/Sgts will be promoted to PO1/WO upon completion of certification) who have a minimum medical category of 432335 and keyboarding skills of 40 wpm with comprehensive grammar and spelling skills in either official language are eligible to apply.

Court reporters are posted to the Office of the CMJ which is located at the Asticou Centre in Gatineau (Québec).

Screen Time Detox: Step away from the ...