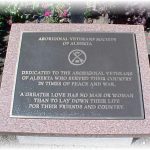 The transition to life as a veteran after years in the armed forces is not always easy, and for Indigenous veterans, the challenge can be even greater.

It’s for that reason the Aboriginal Veterans Society of Alberta (AVSA) has made it its mission to provide support for Indigenous veterans as they make their way through a post-service life.

The society was formed in 1983 by several Second World War and Korea veterans, explained John McDonald, past president of the AVSA.

“The mandate was to organize and unite all Aboriginal veterans for advocacy and support of each other,” he said.

A large reason for creating the society was to work to improve the situation of veterans compared to how the federal government treated them.

“The Indigenous or the Aboriginal veteran has always been discriminated against after every war Canada has participated in,” McDonald explained. “We’ve never got a fair shake.”

Although the AVSA cannot do everything to make up for a history of mistreatment, he said the society works hard to do whatever it can. This can be a challenge, because in many cases it can be difficult to find Indigenous veterans in need of assistance.

“The Aboriginal veteran is a very proud individual and he does not like advertising his situation,” McDonald said, adding non-Indigenous veterans also have the same pride.

Among the many ways the AVSA seeks to help Indigenous veterans is to work to get them into living situations that are respectful and afford them the dignity they deserve.

“We find homeless veterans and we attempt to get them care and get them into a home where they can be looked after and live the remainder of their lives in dignity,” McDonald said.

The society also tries to go out and find veterans who have been placed in nursing homes by their families and essentially left there. Those veterans should be in veterans’ hospitals, McDonald said, but it is often difficult to get them into those facilities.

In conjunction with the Royal Canadian Legion, the society’s goal is to honour Indigenous veterans while they are still alive. And when they pass away, the AVSA shifts gears and works “to ensure future generations know the contributions made by Aboriginal veterans,” he added.

In death, the AVSA also recognizes the service Indigenous veterans provided to Canada by working to provide the veterans with a dignified burial, cemetery plot and headstone. Many Indigenous groups do not use headstones, McDonald said, but for those individuals who want one, the AVSA will work to get one.

On the whole, McDonald said the AVSA wants to provide support to veterans, in any way it can.

“We support each other,” he said. “We advocate [for] and support all veterans.”