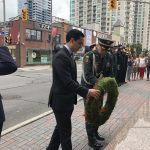 On the occasion of the 200 Bicentennial of the Anniversary of Independence of Colombia, the Embassy of the Republic of Colombia in Canada with the assistance of Vice Chief of Defence Staff through Directorate of Foreign Liaison, paid tribute to the father of their Independence, Liberator Simon Bolivar. Military Attaches from Colombia and Peru, as well as members of the Canadian Armed Forces belonging to the DND/CAF Latin- American Heritage group (Capt Milton Hoyos, Capt Rey Garcia-Salas, Capt Oscar Morales, Lt (N) Lubin Calderon, Lt (N) Diego Naranjo-Parra, and MCpl Guillermo Garza-Risueño) attended this ceremony. In order to reflect a military environment, a Piper man (Cpl Adam Tingskou) was invited to delight attendees with folkloric music.

The Ambassador of Colombia Federico Hoyos Salazar and Col William Cabrera from Colombia imposed a wreath at the Monument of the Liberator Simon Bolivar, located on Besserer Street and Dalhousie Street in Ottawa, on Wednesday, 7 Aug 2019 at 11 am.

Simon Jose Antonio de la Santisima Trinidad Bolivar Palacios Ponte y Blanco, also known as Simon Bolivar, was born in Caracas (Venezuela) on 24 July 1783 and died in Santa Marta (Colombia) on 17 December 1830. He was a military leader and Venezuelan politician. Together with Jose de San Martin, he played a key role in the successful struggle of Latin-Americans for the Independence of the Spanish Empire, and today he is one of the most influential politicians in the history of Latin-America,

After the triumph over the Spanish Monarchy, Bolivar participated in the foundation of the first union of independent nations in Latin-America, Gran Colombia, a republic of which he was president from 1819 to 1830. The state included the territories of present-day Colombia, Ecuador, Panama and Venezuela, and parts of northern Peru, western Guyana and northwestern Brazil. Then Secretary of State and future president of the USA John Quincy Adams, claimed it to be one of the most powerful nations on the planet. Bolivar is still considered in Latin-American history as a hero, visionary, revolutionary and liberator. During his life, he led Colombia, Panama, Venezuela, Ecuador, Peru and Bolivia to independence, and helped lay the foundations of democratic ideology in much of Latin-America.

In Honor of this great “HERO” Venezuela donated the bronze Monument of Simon Bolivar in 1988 to Canada, which was sculpted by well-known artist Martin Toledo in Caracas, Venezuela.

Dropping meteorological buoys in the Arctic