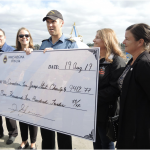 After a lengthy deployment, HMCS Regina sailors disembarking off the ship last week were some of the most well-groomed sailors in the Royal Canadian Navy.

Their expertly cropped crew cuts and neatly trimmed bangs were the work of Master Seaman Jeffrey Haines in his makeshift barbershop ‘Greasy Clippers’.

For the past six-and-a-half months, the 34-year-old Marine Engineering Technician has been the ship’s unofficial coiffeur performing his cuts from a corner of the ship’s Stoker Shop, all in support of Canadian Tire Jumpstart Charities, a national charity dedicated to helping kids overcome financial and accessibility barriers to sport and play.

While most of the ship’s company were reunited with their loved ones, MS Haines walked down the brow with an oversized cheque for $9,412, which he presented to Katlyn Soanes, Regional Manager, Pacific for Canadian Tire Jumpstart Charities.

“Jumpstart is thrilled to accept this generous donation from Master Seaman Haines,” she said. “We are very grateful for his fundraising efforts and for the support of all of our donors coast-to-coast who help get kids of all abilities off the sidelines and into the game.”

Ryan Cane, Senior Manager of Military Recreation and Community Services for Canadian Forces Morale and Welfare Services (CFMWS), also applauded MS Haines for his “wonderful” efforts that will help support the children of military families in Esquimalt.  Cane noted that Personnel Support Programs (PSP) has also partnered with Canadian Tire Jumpstart Charities to provide financial assistance to families with children ages four to 18 in accessing programs and equipment. Last year, $34,000 of support from Jumpstart helped over 450 children from military families

MS Haines tipped his hat to his shipmates for their generosity and called their support “truly amazing.” He says it wasn’t too hard to drum up support for his initiative and he had many repeat customers over the course of the deployment.

“I can’t emphasize enough the importance of sports for children,” said MS Haines who is the father of two children, Emily, 2, and Lucas, 3. “No child should go without access to sports equipment or sports programs because of finances and no parent should have to carry the burden of not being able to give their child the opportunity to play sports.”

For more information about Jumpstart and how to get involved visit their website: https://jumpstart.canadiantire.ca.

I am master seaman Jeff Haynes from HMCS REGINA currently on Operation ARTEMIS.

I’m a Marine Technician onboard and also the ship’s barber.

I usually do eight haircuts a day and each haircut costs five dollars.

I’m hoping that by the time we get home I’ll have roughly two thousand dollars to donate to Jumpstart charity.

Jumpstart is a charity that helps kids purchase sporting gear for different sports and it also helps them pay for registration fees as well.

Well I really believe that kids should have the opportunity to play sports and it’s through sports that kids can develop not only physically but also socially as well.