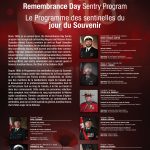 Six Canadian Armed Forces (CAF) members and a member of the Royal Canadian Mounted Police (RCMP), all selected from across the country, are in Ottawa this week to play important roles during this year’s national Remembrance Day ceremony in Ottawa, as part of the annual Remembrance Day Sentry Program.

The CAF and the RCMP selected these program participants for this honour based on criteria such as deployment experience, community involvement, physical fitness, and their record of conduct.

In addition to the Remembrance Day ceremony at the National War Memorial on November 11, the seven members participate in various other activities, including visits to Parliament Hill, National Defence Headquarters, the Canadian War Museum, the National Military Cemetery, and the RCMP Musical Ride Stables.

Created in 1998, the Remembrance Day Sentry Program recognizes outstanding CAF members, both Regular and Reserve Force, and one member of the RCMP, for their dedication, professionalism, and performance.

This years’s program participants are:

Airwomen from 17 Wing inspire at Girls ...