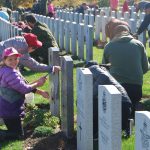 Two hundred volunteers gathered in the National Military Cemetery for an annual event to clean headstones in preparation for the Beechwood Remembrance Day ceremony.

Provided with buckets, brushes, hot chocolate, and Tim Hortons coffee, military and community members spruced up the official cemetery of the Canadian Armed Forces, scrubbing 3500 headstones over the weekend of 19-20 October.

“Opportunities such as these provide the Canadian Armed Forces an excellent opportunity to give back to their community and become familiar with their city,” said Kelsey Brown, who helped coordinate the event with the Military Family Resource Centre. “We’re thrilled that our volunteers were able to contribute to all headstones receiving a cleaning this year.”

Families attended the event for a variety of reasons: some wished to pay respects to a particular headstone, while others sought to visit the National Military Cemetery for the first time. For Private Eve Marchand’s teenage daughters, it was a chance to log some community service hours needed for graduation, while for Warrant Officer (WO) Nicole Fagan and her son, it offered them the opportunity to reflect on sacrifice.

“I know he has felt the sacrifice of being a family member left at home,” said WO Fagan, who deployed twice since her son was born. “Now that he’s older, I wanted him to see the place where we lay those who paid the ultimate sacrifice.”

The headstone-cleaning event gained traction in 2016 when Warrant Officer, now Lieutenant, Julie Archambault noticed veteran headstones noted the need. “I reached out to a few contacts I had in the National Capital Region and the project fired up quickly,” she said.

Although she is now posted to Winnipeg, Lt Archambault is honoured to hear the tradition in Ottawa is still alive. “What a privilege to be able to contribute to honouring our veterans and their families by this simple, basic, and humble gesture,” she said. “I find it quite heartening that an impressive number of volunteers keep answering the call for this annual project.”

The National Military Cemetery was officially opened in 2001 in order to honour Canadian Armed Forces personnel who have faithfully served their nation in times of peace and war. As part of the Canadian Armed Forces Transition Group, it is a national focal point for a grateful nation to honour those who have placed themselves in harm’s way on behalf of the people of Canada. Today, the National Military Cemetery serves as the final resting place for more than 2300 soldiers, sailors, and aviators.