Going the Iron Distance on the Triathlon World Stage 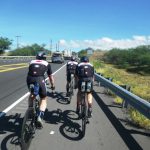 Colonel John Giguère’s first reaction when it was suggested he, then in his early forties, should take part in his first triathlon, was “That’s crazy talk!”

His second reaction, after doing some research, was “This triathlon thing, it’s kind of stupid. But I think it might be kind of fun.” Six months later, he ran his first Olympic distance triathlon.

On October 13, Col Giguère, a 35 year Reserve Force armoured officer currently working at Military Personnel Command in Ottawa, was one of seven athletes representing the Canadian Armed Forces (CAF) at the Ironman World Championships in Kailua-Kona, Hawaii. All the athletes successfully finished the race, proving themselves to be among the best in the world.

“Kona,” as it’s known in the Ironman competition world, is limited to a total of 2500 competitors, including professional athletes. They compete in a triathlon at the “iron” distance: a 3.86 km swim, 180.25 km bicycle ride, and a marathon 42.20 km run, raced in that order and without a break. That is significantly longer than the Olympic distance, which is a 1.5 kilometre swim, 40 kilometre bike ride and 10 kilometre run.

This was Col Giguère’s second year competing at Kona.

“It’s the pinnacle of long distance triathlon racing,” he says. “You’re with the best of the best in the world. It’s just an awesome experience.”

He says long course triathlon is growing as a sport and CAF participation in it has gone up significantly in the past four years. This was the biggest team the CAF has ever sent to the Ironman World Championships, and LCol Travis was excited when he heard he made the cut himself for the first time this year.

“It’s one of those bucket list items for any triathlete,” he says. “And the fact the military has this opportunity and provides the support where they pay a portion of the cost is fantastic.”

Unlike Olympic distance triathlon, the long course, or Ironman, triathlon is not an official CISM (Conseil international du sport militaire) sport. However, the team gets support from Personnel Support Programs (PSP). For the trip to Kona, for example, the athletes can claim registration fees and travel expenses up to a certain amount, and the program is covering the accommodations and rental vehicle. In addition, there is now a long course aspect to the CAF Triathlon Program, including regional and national training camps.

“I’m very much appreciative of the fact that the military has provided us with this opportunity,” says LCol Travis. “It’s one thing to put the work in, but without the funding, without the Canadian Forces Morale and Welfare Services (CFMWS) and PSP there is no way we’d be able to do it.“

Daryl Allard is the Director Fitness, Sport and Health Promotion with CFMWS.

He says the idea behind the sports and fitness programs at all levels is to help CAF members increase readiness and operational effectiveness. When the athletes make it to an international competition like the Ironman World Championships, it goes beyond the program objectives.