Ex LEADERSHIP CONQUÉRANT : A training exercise like no other 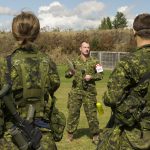 All 200 officer cadets from Royal Military College Saint-Jean (RMC Saint-Jean) struggled, sweltered, fired, and ran through four training environments over three nights on the cusp of the months of September and October at a shooting range, on obstacle course, conducting stalk training, and running of mission scenarios at the Farnham Ranges and Training Areas in Quebec.

The goal of Ex LEADERSHIP CONQUÉRANT 18 was to consolidate physical fitness, military competencies, and leadership qualities of future officers of the Canadian Armed Forces (CAF).

The weekend began with a perfect Quebec autumn day  ̶  the leaves in Montérégie had started to turn the famous red, and the air was crisp and dry. With good reason to embrace this biannual training with a smile, everyone gave their all and ended up covered in dust, mud, grass, and sweat.

‘’The exercise provides a mix of novice and seasoned officer cadets with different levels of experience a supportive environment for acquiring new leadership skills and for honing existing ones,’’ said Sub-Lieutenant Alexandra Hejduk from Vancouver, B. C.

The exercise emphasizes cooperation and teamwork. As Colonel Gervais Carpentier, RMC Saint-Jean Commandant, noted “the officer cadets learn to work together as a team to solidify the links forged at the college, and to be better prepared for the challenges for the future.”

The obstacle course and the mission scenarios best represent the teamwork facet of the exercise, as the participants must place their trust in one another to overcome the various hurdles of these physically and mentally demanding components.

More subtle circumstances of shared leadership were also displayed at the firing range.

A more senior officer cadet quietly reminded his neighbour of the steps in the safety check of the weapons’ drill.

A foreign officer cadet showed initiative in collecting washers used during the safety drill from her colleagues to help gain a few extra minutes for lunch. An experienced foreign officer cadet laid down in the prone position next to a fellow Canadian officer for several shooting relays to help improve the junior’s aim and shooting abilities.

As Col Carpentier pointed out, foreign officer cadets often come with several years of experience in active duty in their own countries, and their skills are put to good use in mentoring their Canadian counterparts. “They might end up working together on an overseas operation one day,” said Col Carpentier.

In the spirit of teamwork and sharing of national identities, and in the evolving of one’s competencies, each participant provided their field observations in the classroom to share lessons learned. Highlights were those about military craft, performing battle drills, the stealthy camouflaged approaches through the dense brush stalk field, and how to lead a section and communicate effectively within a team environment.

“Today’s officer cadets are tomorrow’s leaders in the CAF. It is through exercises like this one that their qualities of courage, integrity, honour and loyalty are demonstrated and strengthened,” concluded Slt Hejduk.