Deploying for a Good Cause: Reservists on Op UNIFIER 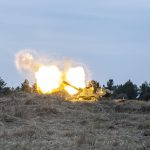 “As a Reservist, deploying on Operation UNIFIER has been a fulfilling experience,” says Corporal Andriy Tovstiuk as he leaves the historic Lychiakiv Cemetery in Lviv, Ukraine on April 28, 2019.

When he’s not busy helping businesses succeed as a Digital Marketing Specialist, the Ukrainian-Canadian serves with 6 Intelligence Company, an Edmonton-based Army Reserve unit. He’s deployed on Op UNIFIER as a Linguist with Joint Task Force-Ukraine (JTF-U) Roto 7 and has spent the afternoon translating for the Canadian chaplain at a service for Ukrainians killed in ongoing regional conflicts.

Launched in 2015, Op UNIFIER is the Canadian Armed Forces (CAF) mission to support training for the Security Forces of Ukraine (SFU). “Our Reservists enhance the agility of the Task Force,” says Lieutenant-Colonel Frederick Côté, JTF-U Roto 7 Commander, at his headquarters in Starychi. “In addition to their military qualifications and experience, they bring diverse skillsets from their civilian employment that we leverage to meet the needs of our Ukrainian partners.” He adds that: “While majority of Roto 7’s personnel come from 3e Battalion, Royal 22e Régiment in Québec, there are Reservists from all across Canada playing important roles in Op UNIFIER.”

Since UNIFIER involves international partnerships, many of the roles LCol Côté mentions involve coordinating international relationships. For example Captain Wembonyama Shembo from 4 Intelligence Company in Montréal, is the Liaison Officer to the Ukrainian, British, Polish, American, Lithuanian, Danish and Swedish training elements. He is also a Platoon Commander mentoring Ukrainian partners. And that’s just two of the hats he wears on this tour. He describes his work as being “both tactical and cultural.”

With previous tours and more than 25 years’ experience in both Regular and Reserve Forces, Sergeant Stephane Comeau, the Task Force Provost Marshall is a Reservist from 3 MP Regiment in Moncton, New Brunswick. His responsibilities include law enforcement for Canadians on the mission and liaison with local law enforcement and counterparts from other partner nations. He explains that: “Although Reservists are not obligated to deploy overseas, many deploy for the experience and to support their Regular Force comrades.”

Cpl Melanie Roy, a Financial Services Administrator from Les Fusiliers de Sherbrooke in Québec, agrees. “I deployed for more experience, new challenges and to give back for all the support I’ve received in my career,” she explains. “The experience I acquire here will be put to good use when I return to my unit. Our Ukrainian hosts value this mission and I’m proud to be part of it.”

“Supporting a nation willing to ask for help in attaining its goals is laudable” and makes Captain Nathalie Gareau, a member of The Royal Montréal Regiment excited to be part of UNIFIER. A Translator and teacher in civilian life, the second-in-command of the Officer and Non-Commissioned Officer Development Group marvels at how Reserve, Regular Force and personnel from other nations work collaboratively through the mission.

UNIFIER is an “excellent opportunity to help the SFU realize their professional and institutional development goals,” says Major Corey Anhorn of the Canadian Grenadier Guards in Montréal and the CAF Advisor to the Ukrainian National Guard. “Moreover, it’s an excellent opportunity to learn from the Ukrainians.” With a background in Aid and Development Work and previous deployments under his belt, he echoes LCol Côté’s observations about the diversity of experience that Reservists bring to deployments. And his advice to Reservists is that: “A deployment is the best opportunity you can take to develop and hone your skills.”

Back at the Lychiakiv Cemetery, Cpl Tovstiuk settles behind the wheel for the long drive back to the Canadian base. “I’m proud to be able to bring my language and cultural skills to support this mission,” he comments. “I can see how Op UNIFIER is making positive contributions to the SFU and Ukraine. Deploying allows me to contribute to a good cause.”