D-Day and the Battle of Normandy 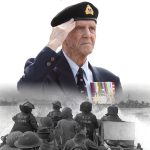 This year marks the 75th anniversary of D-Day and the Battle of Normandy during the Second World War. Some 14,000 Canadian soldiers came ashore at Juno Beach in occupied France on June 6, 1944—a date now known to history as D-Day. Thousands of Royal Canadian Navy and Royal Canadian Air Force service members also took part in Operation Overlord, as the massive Allied assault was codenamed. D-Day would only be the opening chapter of the Battle of Normandy which raged until late August 1944 and would be a pivotal step in the liberation of Western Europe and the end of the war.

This special commemorative poster features Captain (N) (ret.) Harold (Hal) Tilley who served aboard an infantry landing craft that carried soldiers to Juno Beach on D-Day. He survived his dangerous wartime experiences and went on to have a distinguished 39-year naval career. The historical image at the bottom shows infantrymen being transported to the Normandy beaches on D-Day in a small assault landing craft which had been launched from the Royal Canadian Navy’s AFSAC Prince Henry.