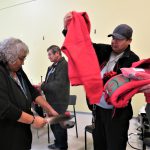 The Canadian Rangers have been busy expanding their capability to serve the people and youth of Northern Ontario with two new patrols, and two new detachments, in addition to a new Junior Canadian Ranger patrol.

The newly established ranger patrols are in Aroland First Nation, and Long Lake #58 First Nation, two small Ojibway communities about 270 kilometers east of Thunder Bay. The new detachment in Ginoogaming will be a sub-component of the Long Lake patrol, while the new members in Marten Falls will be a detachment of the Aroland patrol. The new Junior Rangers patrol opened in Pikangikum First Nation an Ojibway community where a new Canadian Ranger Patrol opened in early 2019.

Ontario, was present for a swearing-in ceremony in Aroland. “There’s no doubt in my mind that you are going to make a difference in your community,” he told the Rangers. “You should be proud of yourselves for what you have volunteered to become.”

“I’m very pleased and very happy for my First Nation that we are finally getting the Canadian Rangers,” said Aroland Chief Dorothy Towedo. “It’s something that’s been needed in our community for a long time. Now we have our own Rangers. This is a good day.”

The new patrols and detachments “close a loop in our coverage of Northern Ontario,” LCol McArthur shared. “It ensures that the Rangers can cover a broader area than we could traditionally. It makes us more efficient, and more effective.”

In Aroland, Elder Nora Atlookan performed a traditional ceremony in which she smudged the new Rangers and their new uniforms. “I’ve been a member of the Canadian Armed Forces for 34 years, seven years as a commanding officer, and I have sworn in hundreds of soldiers in my career,” LCol McArthur said. “Until now I have never sworn in a Ranger or opened up a Canadian Ranger patrol. I tell you, it’s an experience. I could see the new Canadian Rangers had the same pride as our soldiers in the Canadian Army. They had the same smiles on their faces, and showed the same pride as they were sworn in. These new Rangers are going to be directly helping their communities. I am proud of them.”

The ceremonies for the patrol openings were attended by the chiefs of the First Nations and by Ronald Beaulieu, mayor of the municipality of Greenstone, as well as by relatives and friends.

“It’s a good day for Pikangikum, it certainly is.” said Chief Dean Owen. “We’ve been wanting this for our youth for a long time.  I’m very hopeful the Junior Canadian Ranger program will help our community to raise the youth up, to become mature, responsible young people and be able to take on future leadership roles such as being chief one day. I have high hopes for this program.”

“These new Junior Canadian Rangers have seen the local Canadian Rangers assisting in the evacuations and in other crises here in Pikangikum,” said WO Kevin Meikle, an army instructor. “I told them that as Junior Rangers they have their families, their community, and now the Ranger family as another layer of support,” WO Meikle said.

The Rangers are part-time Canadian Army reservists who assist remote and isolated communities across the Far North of Ontario in a range of emergencies, including searches for missing and overdue people and in evacuations for floods and forest fires. The Canadian Rangers are now present in 27 First Nations communities. The Junior Canadian Rangers is a culturally sensitive Canadian Army youth program for boys and girls aged 12 to 18 in remote and isolated communities across the Canadian North.

(Sergeant Peter Moon is the public affairs ranger for the 3rd Canadian Ranger Patrol Group at Canadian Forces Base Borden.)