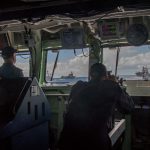 “At the moment, I haven’t seen many insects, no snakes, no spiders and no drop bears,” Lieutenant (Navy) Carl-Alexander Marcoux, a Logistics Officer in the Royal Canadian Navy, notes jokingly after arriving at Queensland, Australia. He is one of the Canadian Armed Forces (CAF) members working within the Exercise TALISMAN SABRE staff. Her Majesty’s Canadian Ship (HMCS) Regina with an embarked CH-148 Cyclone, along with supply ship MV Asterix, are also participating in the exercise from July 11 to 24, 2019.

Held every two years by Australia and the United States, Exercise TALISMAN SABRE focuses on land, air and sea training in the Asia-Pacific region. The amphibious environment off the west coast of Australia, where the exercise takes place, allows participants to practice a spectrum of skills while focusing on collaboration and readiness.

Although HMCS Regina supports maritime scenarios, a small contingent of soldiers from the Canadian Army and aviators from the Royal Canadian Air Force are supporting land and air scenarios. This way, the three CAF environments are contributing to the exercise in various domains.

“I think it’s extremely important that Canada shows that we’re not only interested in participating in operations. And when we exercise, specifically with these partners, we’re progressing things along in this region, which has a huge value in Canadian objectives,” explains Commander (Cdr) Jacob French, Commanding Officer of HMCS Regina, on Canada’s participation in the Asia-Pacific region.

Notably, the CAF is working with partners such as the United States, Australia, Japan, New Zealand and the United Kingdom.

“We feel extremely honoured to be down here and we’re integrated into a really great group,” Cdr French continues. “I believe that Exercise TALISMAN SABRE is a great platform for us to learn from each other and show our capabilities. We can take a huge step by moving forward from an exercise like this, and really focusing on some high-end war-fighting skills.”

Crewmembers on HMCS Regina share this sentiment. Leading Seaman (LS) Blake Verhaeghe, a Sonar Operator and Surface to Air Controller (SAC), expressed his excitement at participating in the exercise. “It can be very educational to see how other countries conduct Anti-Submarine Warfare, which is our primary role during this exercise,” he says.

The prospect of participating with other nations and representing Canada is also a rewarding feeling. Differing cultural aspects can be a possible challenge during an exercise involving international partners. However, to LS Jessica Silva, also a Sonar Operator and SAC onboard HMCS Regina, the obstacle is not as daunting as it seems. “Language barriers can be difficult, but luckily, air safety is a universal language,” she says.

For the CAF, participating in Exercise TALISMAN SABRE emphasizes their commitment to being a strong partner for maritime security in the Asia-Pacific region.

Cdr French expresses his pride, “I’m really proud of the crew and the way we’ve been performing. I’m super proud of the effort they’ve put in and it’s the end of a long deployment. And I just think they deserve credit.”

But for many sailors on HMCS Regina and MV Asterix, participating in the exercise, is not only a great way to end a deployment, it also represents a much more personal milestone as a CAF member. Lt(N) Marcoux ends with a thought of gratitude, “Having this opportunity to act as ‘Ambassador’ for my country during this exercise makes me realize the reasons why I joined this organization in the first place.”