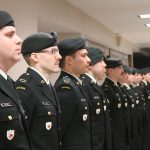 HCol Kyte, now Dean of the Faculty of Hospitality and Tourism at Algonquin College, helped coordinate the parade.

Capt (Ret) Carty, commissioned from the rank of Master Warrant Officer, retired in 1989 after 20 years of service with the Military Police. He served with the Royal Canadian Mounted Police (RCMP), and assisted Algonquin College with their security program up until a well-earned retirement.

The event was well choreographed, and was followed by a reception with culinary delicacies.

Why I Give: Photo Gallery