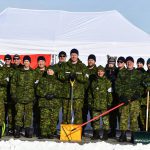 Canadian military personnel from the Canadian Detachment Joint Base Elmendorf-Richardson (Cdn Det JBER), Alaska and their families joined together to pick up their shovels and rakes to support the 47th Iditarod Sled Dog Race, commonly referred to as the “The Last Great Race.”

This year’s race kicked off on March 2, 2019. For the latest, visit the Iditarod website.

A snow trail is laid-out on the downtown streets of Anchorage for the ceremonial start of the race. Canadians are responsible for keeping a segment of the trail groomed and for ensuring the public doesn’t get too close to participants as they wind their way through the city streets.

The Iditarod traces its origins, at least partially, back to 1925 when the isolated coastal village of Nome needed a large quantity of serum to counter a large diphtheria outbreak. The only method to transport the serum to the town, at the time, was by dog sled. In 1973, the Iditarod was born to promote the role that mushers and dog teams played in delivering the serum, highlighting the historical method of transportation that made Alaska what it is today.

The Iditarod traverses 1,600 kilometers through mountain passes, over frozen lakes and rivers, through forests, along coastlines, and over barren tundra. It takes a tremendous amount of physical and mental stamina to complete this grueling race. Mushers must be cognizant of the balance of nutrition, rest, and care of their fourteen-dog sled teams. Veterinarians conduct an in-depth physical health check of every dog prior to the race and at each of the 23 checkpoints along the race. Mushers must take one mandatory 24-hour break, and two 8-hour breaks during the race.

In order to qualify for the Iditarod, rookie mushers must be at least 18 years old, have completed a minimum of two 480-km qualifier races and one 240-km qualifier race. Pursuant to the rules, all participants must have, “… demonstrated the necessary physical and mental aptitude and preparedness, as well as the necessary wilderness and mushing skills.” A rookie who completes the Yukon Quest (a 1,600-km sled race from Whitehorse, YT to Fairbanks, AK) is also eligible to enter the Iditarod.

Four Canadian mushers participated in this year’s race, and Cdn Det JBER personnel and their families cheered all four mushers as they passed by their tents. The Iditarod Ceremonial Race is just one example of an event where Canadians volunteer their time to connect with and support their local communities.

The post 47th annual Iditarod race kicks off in Alaska with Canadian support appeared first on The Maple Leaf.